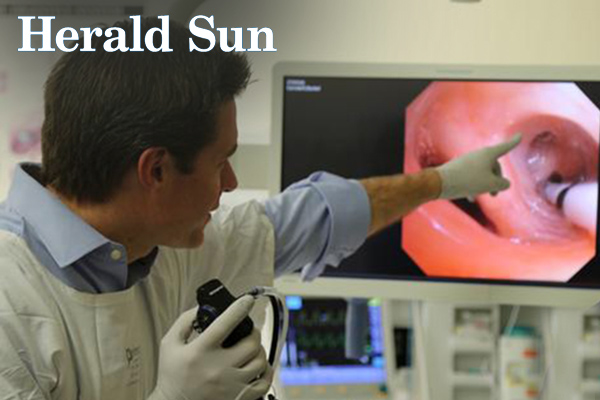 Photo is Dr Nicholas Wilsmore operating on Rachel Cairnduff at the Epworth Eastern.

Ms Cairnduff, 30, suffers from adult onset asthma which regularly leaves her gasping for air. “I describe it like I’m always breathing through a straw,” Ms Cairnduff said.

The former nurse and mother of two was diagnosed with adult onset asthma when she was 27 and coped with chest infections or pneumonia complications as a regular part of her life.

This year alone she has taken eight courses of antibiotics.

“The worst thing about it is the exhaustion. I still don’t have my breathing under control even though I take five or six medications every morning and evening,” she said.

“I force myself to walk every day, but can only manage the flat surfaces near my home in Warrandyte.

Ms Cairnduff was relieved when her respiratory specialist Dr Nicholas Wilsmore at Box Hill’s Epworth Eastern, suggested that bronchial thermoplasty might be the way forward.

It’s a relatively new procedure in Australia, only used for patients where previous medical therapies have been trialled but were not working as well as hoped.

The Epworth Eastern was the only private hospital to do bronchial thermoplasty procedures in Melbourne.

“I’d exhausted the types of medication which can help me, and I’m using the highest level of inhaled steroids I can, and when the procedure was mentioned I was nervous at first, but I’m all for it if it can help me,” Ms Cairnduff said.

The bronchial thermoplasty involves three separate procedures — two for the lower lobes of the lungs and another for the top lobes.

The procedure involves inserting a bronchoscope camera into the lungs which delivers thermal energy to heat up parts of the lung from the inside to 65C.

This destroys some of the smooth muscle tissue that constricts during an asthma attack and makes it harder for a patient to breathe, but wasn’t hot enough to harm other structures in the lungs.

“The smooth muscle tissue doesn’t serve a purpose, and removing it opens up the airway,” Dr Wilsmore said.

“The patient shouldn’t have as severe asthma attacks following the three procedures.

“Bronchial thermoplasty is relatively new in Australia, although it’s been used for some time in the USA and Europe.

“The cost has been prohibitive, as the machine costs tens of thousands of dollars, and for every new piece of technology or procedure that comes out there is always a gestation period where people are cautious.”

On September 4, Rachel had her first procedure completed at the Epworth Eastern by Dr Wismore and will have her second round in a few weeks time.

The surgery took pace during Epworth Eastern’s annual Partnering With Patients week which the hospital celebrates at the beginning of September.

Epworth Eastern uses the week to highlight the interests of patients as a priority and how hospital staff includes them in clinical decisions.