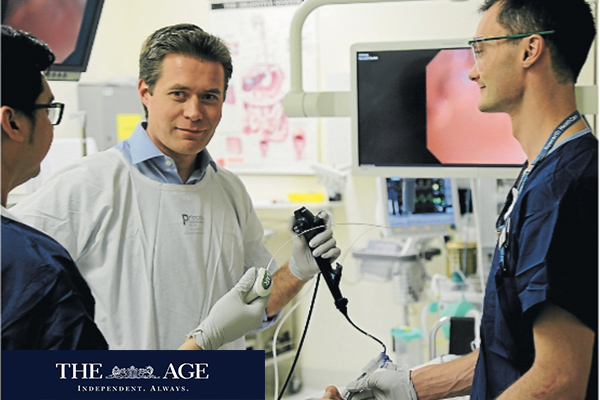 Here is a nice article highlighting our cutting edge Interventional Pulmonology service at Epworth Eastern. We are also recruiting for a lung cancer screening study, as can be seen from the article.

Fresh hope is emerging for people at risk of lung disease, with new technologies and innovative medications suggesting an improvement in both diagnosis and treatment.

Dr Nicholas Wilsmore, a respiratory and sleep physician at Epworth Eastern, Box Hill, says many conditions can be diagnosed accurately by obtaining a sample of tissue from the lungs or other areas of the chest.

“Until recently, the only way to do this was for a thoracic surgeon to cut open the patient’s chest under a general anesthetic,” he says.

“We can now obtain large tissue specimens from the lung using a flexible camera and a specialised probe, called a cryoprobe.

“It’s a day procedure with a lighter degree of anesthesia and no cuts at all.”

The use of endoscopy and other such tools has given rise to a new sub-specialty known as interventi o nal pulmonology.

The techniques hold particular promise for many elderly lung patients. For this

group, traditional procedures can be daunting.

As an interventional pulmonologist, Wilsmore sees great potential for treating

conditions such as pulmonary fibrosis, for which two new medications have recently been added to the Pharmaceutical Benefits Scheme.

” Several other conditions look like pulmonary fibrosis, so being able to distinguish these accurately gives us confidence we ‘re using the correct therapy

to treat each condition.

As well as expanding the treatments it offers, Epworth Eastern seeks to contribute

Lung cancer is the leading cause of cancer deaths in Australia, partly because many people in the early stage of the disease have no symptoms.

By the time they realise something is wrong, effective treatment is difficult.

In a US clinical trial, a group of people aged 55 to 70 with a history of smoking were given an annual CT scan.

The results, published in the New England Journal of Medicine on August 4, 2011, showed that the screening program led to a 20 per cent reduction in lung cancer

This may seem like an obvious argument for a screening program such as those now used to detect bowel and breast cancer.

However, one study is not enough to persuade a government to devote precious public minds to a national program.

Epworth Eastern is one of several Australian sites participating in an international trial which aims to test the US findings.

If this trial achieves similar outcomes, it will add weight to the case for a targeted CT scanning program in Australia.

“We want asymptomatic people who are either smokers or recent ex-smokers, aged 55 to 80 and in good general health,” Wilsmore says.

“Scans can pick up a range of abnormalities and so we need to have ways to distinguish between malignant and benign lesions.

“At Epworth Eastern we can do this because we have the only comprehensive private interventional pulmonology service in Victoria. “